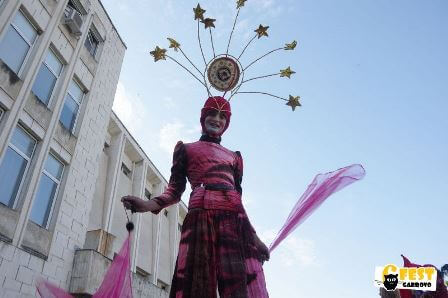 The 7Fest International Festival of Urban Arts and Happiness is organized by a project of the Association of Public Committee Vasil Levski – Gabrovo with the assistance of Fireter Fire & Shadows Theater, Circus De La Lulin, Theater Company SoulMade, Quikk Hands Project ,Firebirds Productions, and Gabrovo Daily. All of them combine efforts to fulfill the project’s goal of turning Gabrovo into a carnival and festival destination of international significance – a center for street art and culture that can be recognized in Bulgaria and abroad. Upgrading and enriching the over 100-year carnival tradition of Gabrovo through contemporary street arts. Encouraging the participation of the local community and enhancing the tourist potential of Gabrovo in the consumption of culture and arts. Presentation of the Gabrovo carnival tradition as part of the European and world carnival tradition. Promotion in Gabrovo of the contemporary world trends for arts in the urban environment. Bulgarian and foreign artists will present performances such as street theater, contemporary circus, light carnival parade, puppet show, and illusions. The festival is realized within three days in May during the International Humor Festival Gabrovo.