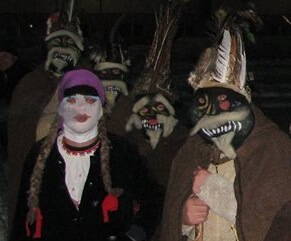 Traditionally in Kula, Yordanoven and Ivanovden are celebrated in old style on 19 and 20 January typical only for this northwest town custom “Kapachi.” From centuries on the night of 19 to 20 January, masked men ritually bath people with the name Ivan or Jordan, as well as nearly married couples.
Each group always consists of an odd number of young men, necessarily being bachelors.
In more recent times, the Kapachi also bathe employees in local institutions, citizens in the streets and bars, practically everyone they meet until noon on January 20th.

In Kula, they are jealous of their unique custom, passed down from generation to generation, from father to son. Years ago such a ritual was also carried out in some of the constituent villages of the municipality.