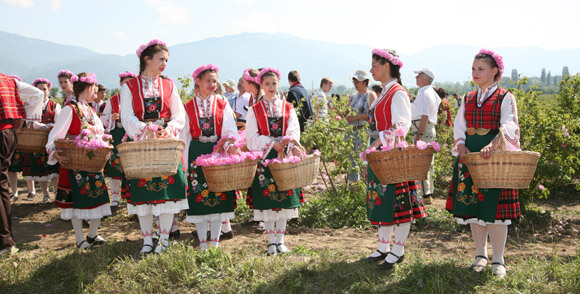 While there are roses in Bulgaria, there will be a Rose Festival in Kazanlak. Traditionally it takes place every year during the first days of June.
The festival is known for its rose events. Every year it begins with its core point – the parade-spectacle Queen of Roses. Local girls participate in that parade in order to compete for the title. The Queen of Roses attends various forums in the twin towns of Kazanlak across the continents as a Bulgarian ambassador of beauty around the world. She also leads the festive carnival procession, which is the culmination of the Rose Festival, held on the first Sunday of June.
Guests can attend the early morning picking of roses and boiling of rose oil rituals. The rituals are performed by professional and amateur folk groups.
The culmination of the festival is the festive carnival that passes through the streets. More than 5,000 persons participate in the carnival, depicting different moments from the history and multi-faceted culture of the Rose Valley.